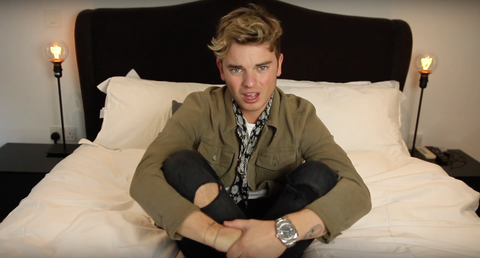 UPDATE: Either YouTube star and former I'm a Celebrity camper Jack Maynard really is on his way to Love Island, or he's massively trolling his hugely dedicated online following.

During the ITV2 reality show's premiere on Monday night (June 4), Jack hinted that he's got his eyes one of the Love Island ladies. Check out his cheeky tweet below:

It's looking more and more like we'll see Jack in Casa de Amor before long...

ORIGINAL: It's quite possible that I'm a Celeb and YouTube person Jack Maynard – known also for his controversial tweets – is taking part in this series of Love Island.

At least, that's what his ex-girlfriend Danielle Sellers has hinted.

Danielle, who appeared on last year's Love Island, teased that she could also be heading to the villa to confront this mystery man.

Appearing on This Morning today (June 4) alongside Love Island's Dom and Jess, Danielle dropped some nuggets of information when quizzed by Holly Willoughby and Phillip Schofield.

"You're still single now? You need to go back in," said Holly. Danielle replied: "There is someone I know who is going in late."

She confirmed that this person is of the male sex, and didn't deny that he's an ex. "Yeah, this is going to be not so much fun for me," she added.

Holly enthused: "That's why you should definitely go back in!"

Digital Spy has reached out to ITV and Maynard's reps for comment.

Maynard departed the last series of I'm a Celebrity just three days in, following the emergence of a number of offensive tweets dating from 2013.

Some of the posts included racial and homophobic slurs, as well as some tweets that used language mocking facial disfigurement.

He later issued a statement saying he was "ashamed" of the old messages and now "realises this kind of retaliatory, inflammatory, insulting language is completely unacceptable".

This Morning airs weekdays from 10.30am on ITV. Love Island returns tonight (Monday, June 4) at 9pm on ITV2.