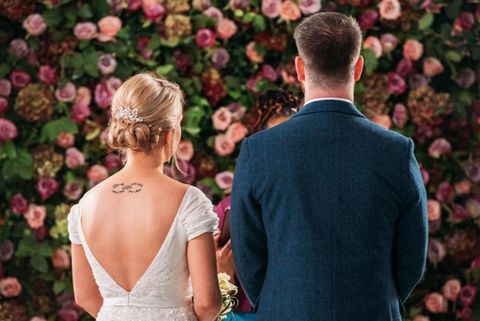 Married at First Sight pairs together total strangers matched by a panel of experts, in the hope they'll hit it off, fall in love and spend the rest of their lives together. It's the kind of romantic car crash (yes romantic car crashes are a thing) that makes TV gold.

Unfortunately, a glance back at the couples from the first two series shows that they didn't quite get the 'happily ever after' they might have wanted. Shocked? Us neither.

Ready for a big dose of heartbreak and short-lived romance? You've come to the right place. Here's where all the previous Married at First Sight couples are now.

Married at First Sight series one

It started so well for Emma and James, who were the show's first ever bride and groom back in series one, with plenty of flirting – but it wasn't to be. Just 34 weeks after tying the knot, their relationship was frayed and they decided to call it a day.

They mentioned snoring and a lack of sexual attraction – both pretty big dealbreakers – as two of the reasons for their break-up, while they also put a bit of blame on the show for telling them they were a match without really talking about their ideals. And that was that.

Poor Kate and Jason seemed doomed from the start, and their marriage ended in a matter of days. It got off to a rough start, then Jason was caught on Tinder and his bride claimed in court documents that he "wilfully" refused to consummate their marriage. Ouch!

They've both got on with their lives away from each other, but while Jason got married to new love Laura last year, his telly ex has been spotted online taking the odd cat selfie, and advertising a room in her London home.

Sam and Jack's story was slightly different. She initially refused to marry him due to pressure from her family, but they later went on to tie the knot once the show was over and they'd got to know each other in a real-life romance.

Sadly, it wasn't meant to be though, and they called off the marriage after just four months. While it looks like they both still live in London, it's thought they don't speak anymore, which is a shame – and Jack looks to have basically vanished off social media.

Married at First Sight's second series saw a bit of an improvement. Well, sort of. All four couples introduced on the show ending up getting married... unfortunately, they also all got divorced.

Among them were Lucie and Steve, who tried to make things work but had to call it a day after six weeks when she decided they could only really work as friends. That sucks, but the silver lining is that, according to reports, they're still close and meet up for coffee.

For Melissa and Clark, it looked like things were on the right track when he made a pretty big gesture by moving from London to Milton Keynes to be with his new bride, and at first it was going positively swimmingly.

Sadly, five months later, it seemed the Married at First Sight curse – totally a thing, by the way – had hit again as they took a break, and their relationship collapsed. Clark was able to walk down the aisle again late last year – although this time it was to see his sister celebrate her wedding.

Everyone remembers Adam getting rather merry on wine during their honeymoon, and it wasn't long into their marriage that Sara had to give him quite the telling off. They still gave it a good go, and she moved in with him for a year until it became clear things just weren't working out.

Talking about the way the show pairs people up and the fact it doesn't seem to work out, Sara has said: "I think that science matches the compatibility between us; what the science can't match or can't create is the chemistry." Nicely put.

It looked nice and rosy for Caroline and Adam, the last couple from series two – they got hitched, moved in together and even bought a fluffy bunny together. However, it seems it takes more than pets and a home to make a marriage work, and a lack of chemistry was enough for them to realise it just wasn't meant to be.

To rub a bit of salt in the wound, it appears Caroline later put up her £850 Vera Wang wedding dress on eBay – it's not really much of a surprise that they don't seem to talk anymore.

Possibly now the most well-known couple to have surfaced from the show, viewers were backing Ben and Stephanie from the start.

After seeming to have immediate chemistry, 32-year-old police officer Steph and 36-year-old property millionaire Ben captured viewers' hearts. We mean, what with Ben getting the wedding date inked on his skin – before even meeting her – and both of them choosing the same song for their stag/hen nights, it all seemed to be fate.

But sadly cracks started to appear when they got to the 'moving in' stage.

Despite revealing that they planned to stay married, news of their divorce later hit headlines. Allegations that Ben had been unfaithful started to surface, and to confuse things even further it was later revealed that he was expecting his first child with another woman.

As you're probably more than aware by now, Ben turned up in the 2018 Celebrity Big Brother house.

This coupling didn't get off to the best of starts, mainly because Harriet was a 'cat person' and Richard a 'dog person' – something that viewers were convinced spelled doom.

Despite attempting to go on dates and Richard doing his best to win his new wife over, it soon became clear that you just can't force something that isn't there. The pair ended up choosing to have a divorce.

Harriet said: "Obviously I didn't want, expect it to end in divorce so I think I definitely leave with a heavy heart."

They still did one better than Wayne and Carrie, who were also supposed to take part in the experiment but never actually made it down the aisle.